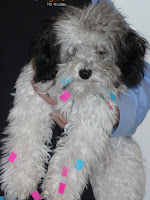 I love my toy poodle Flower. But I have found little consistency in her choice of places to pee. It is not completely random; she generally goes on the grass. She knows where she is going before I do.
After working on Windows servers for the past few weeks, it occurs to me that Microsoft's flagship server product for small businesses is like my poodle. You can lead it around, but it decides what to do for reasons that are neither consistent nor understandable.
I think Flower is much more lovable.
Posted by Kim J. Brand at 9:24 PM

Further along the path to despair

News comes from the Krebs on Security Blog that hundreds of PCs on the network operated by the City of Norfolk have been rendered useless by a 'Time Bomb' distributed to them by malware that infected a print server. Clever. Nobody worries about a print server, cares about its antivirus subscription or manages its updates. Who knew it could be the vector for such scurrilous attacks.
The shadow knew!
Posted by Kim J. Brand at 6:37 AM

Will consumers ever be left with software products that they simply use, understand and become productive with? Or will they constantly be upgraded, service-packed, hot-fixed and release-creeped until they are so frustrated they abandon computers altogether?
Have you grown weary of Adobe updates? Windows updates? Java updates? Is the counter to the right of the version number of whatever software you are using spinning like the odometer on a rental car you're paying for by the mile? Can't they just get this stuff right when they release it?
I'm suffering from IT Fatigue. I believe we've stopped producing software products and have just put software seeds on systems that constantly grow into weeds that smother productivity with empty promises of new features, better security and improved performance.
But to wish they would stop is naive. Not only are connected computers vulnerable to changing threats, but software businesses want to monetize their install base. You are an all-day sucker constantly generating the sweet liquor of recurring revenue. Those publishers know you are an easy mark for 'New and Improved' even if leaving well enough alone is better for you.
And don't get me started on app-jealousy! When subsequently installed applications hijack settings that make them your new-best-friend! Like when my wife installed Adobe Elements to get her new scanner to work and it 'adopted' her SD Media Card - effectively replacing Picasa - and upsetting her expectation and dependence. Old behaviors that she had become accustomed to and which made her computer understandable and predictable were replaced with confusion and frustration.
Where do I get off this merry-go-round?
Posted by Kim J. Brand at 9:02 AM